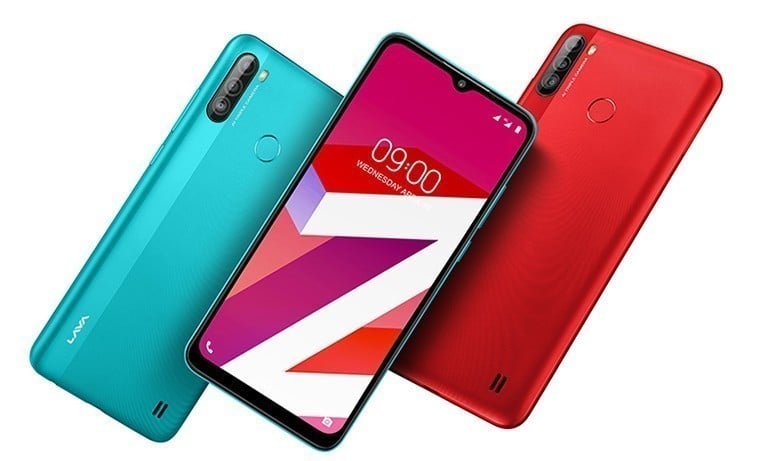 Lava’s new portfolio of Z-series smartphones, are now available to purchase in India via Amazon, company’s official website, and nearby store. Before heading over to the wallpapers section, here’s your sneak peek at the specs of new Lava Z6 smartphone. Starting from the front, Lava Z6 comes with a 6.51-inch HD+ IPS LCD with teardrop notch and 720 X 1600 pixels resolution. The smartphone houses the MediaTek Helio G35 chipset and boots up with Android 10 (Stock Android) out-of-the-box.

Lava Z6 goes official in 6GB RAM and 64GB storage onboard, which can be expanded to 512GB using microSD card. In terms of optics, the smartphone features a triple-lens camera sensor on its back panel. Lava Z6 comes with a 13MP primary camera sensor of f/1.8 aperture, 1.12-micron pixel size, HDR, PDAF, and other basic features support. It also has a 5MP ultra-wide-angle lens and 2MP depth sensor. While on the front, Lava Z6 bears a 16MP selfie shooter of f/2.0 aperture and 1.0-micron pixel size.

The latest offering by Indian smartphone brand, Lava, is billing with a 5,000mAh battery which charges at 10W speed. Lava Z6 is available in Red and Blue color options. Talking about the pricing, the Lava Z6 goes official at ₹9,999 (approx. $136). Now let’s take a look at the Lava Z6 Wallpapers.

Lava’s new Z-series phones are packed with a set of new built-in wallpapers. The collection features every type of wallpaper, it has abstract, scenery, and minimal images. Talking about the numbers then the Lava Z6 bundled with thirteen new stock wallpapers, which you can download for other smartphones. And you’ll be glad to know that we’ve extracted these images directly from the Lava Z6 in its full 720 X 1600 and 720 X 1520 pixels resolution. Here you can check the preview images of Lava Z6 Wallpapers.

Download the official Lava Be U Wallpapers before launch